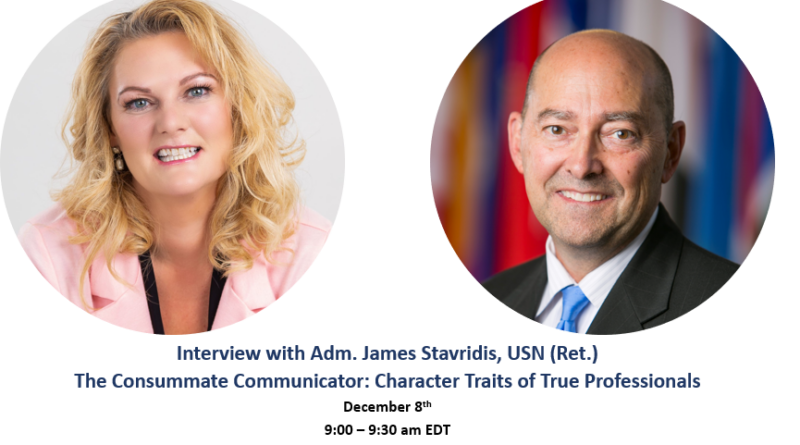 Recently my new book, The Consummate Communicator: Character Traits of True Professionals debuted on Amazon and other retailers. In the back of the book there are a few pages of author’s notes, but I wanted to expand on those notes. This book was inspired by James Stavridis ADM US Navy (Retired). When I was based at the US European Command (EUCOM) I was strongly influenced by the leadership and communication style of Admiral Stavridis. It reminded me of the cult-like culture described by Jim Collins in Good to Great (note: I need to do a book review!).

Even years after leaving EUCOM, I continued to carry the Quick Reference Card from when I served under Admiral Stavridis. I found that no matter what environment I was in, the Character Traits of True Professionals always applied. When I came up with the idea of creating a character based on Admiral Stavridis I told my old boss, Stephen Ewell, over dinner. Mr. Ewell immediately put me directly in contact with Admiral Stavridis. The two were classmates at the Naval Academy together and it was honestly a too-good-to-be-true moment!

When I began outlining the book, I knew that I wanted to use a business setting instead of a military setting. In my experience people often think that military settings can be intimidating. The Quick Reference images in this post show that there was a very military focus in the vision and mission. I reached out to my sister, Barbara Madison, who spent years in banking for advice on how to make the banking environment realistic. I also used a timeline based on The Accidental Admiral, where ADM Stavridis wrote that at one time he considered terminating his military career early.

I have to admit to being a “fangirl” of Admiral Stavridis and I wanted to capture the energy and innovation that he displayed to inspire those in his organization. Despite the fact that he was based in another country, there was never a doubt by the staff on who was driving the direction of the organization. When I decided to write this as fiction, there were three real-life aspects from working at EUCOM that I wanted to ensure were included in the book. The Bridge, the under 30s board, and the boxing ring.

The concept of the bridge in the book was based on Admiral Stavridis’s bridge at EUCOM. He used multiple forms of media to reach out across the organization to include Facebook and Twitter which was not widely accepted in the military community in 2009 when Admiral Stavridis became the Supreme Allied Commander Europe (SACEUR) and EUCOM Commander. In addition to social media he used email and an internal blog called “The Bridge.” He also had reference cards and posters like the ones here printed. The staff constantly referenced his blog posts, numerous articles, and social media when discussing how activities should be handled. This is one of the few times in my professional career where “the boss” was able to clearly disseminate and share their intent to all levels within the organization. At one point my collogues and I assisted in drafting a speech that Admiral Stavridis gave at the U.S. Eagle Base located outside of Tuzla, Bosnia-Herzegovinas for Combined Endeavor 2009. This speech focused on the bridges that we were creating between partners and with other nations. It was not too difficult to work “the bridge” into the book, but I think it is important to note that building bridges is something that ADM Stavridis does exceptionally well.

The under 30s board was very controversial at EUCOM when ADM Stravridis told his staff he wanted advisors from different nations all under 30. The reactions from the staff in The Consummate Communicator are actually mild compared to the staff who faced this at USEUCOM. An advisory board of young people certainly provides a different perspective from most senior leadership teams. I wanted to ensure that this innovative concept made it into the book.

The boxing ring was my most difficult challenge to craft into the story in a way that didn’t seem contrived or artificial. When ADM Stavridis came to Patch Barracks in Stuttgart Germany he would have gatherings with the entire staff in the gym where he spoke to everyone from a boxing ring. The energy and excitement from “the boss” giving a speech from a boxing ring made it feel like a High School pep rally before a big game. I wanted to capture this feeling in the book and had to try to weave it into the story in a way that would seem natural for the CEO of a bank. I hope it worked.

The Consummate Communicator is available in ebook, paperback, hardback, and audio.

One thought on “Behind the Book – Fact and Fiction”

I am passionate about public speaking, project management, & shoes!

Sugar has me completely trained. He refused to dri

After an unexpected overnight in Newark on my trip

Unexpected overnight in Newark but made the best o

I saw the rack where Cliff Stoll found the Hannove

San Francisco Bay trail loop. I am so blessed to b

Life doesn't require that we be the best, only tha

Life doesn't require that we be the best, only tha

Find your peaceful place Life is a Project www.am

Find your peaceful place Life is a Project www.am

Enjoy each moment. Life is a Project www.amyshamil

Enjoy each moment. Life is a Project www.amyshamil

Each new day is a once in a lifetime experience! L

Each new day is a once in a lifetime experience! L

Be so positive that negative people don't want to